We create unique solutions on the architectural market based on
databases and artificial intelligence and genetic algorithms.

In cooperation with Roark Studio and Arup, we have prepared a set of analyzes and simulations for the concept of expansion of the National Museum in Warsaw.

The property on which the competition task is to be implemented is located in a unique location - at the intersection of several viewing axes, surrounded by park greenery, with a strong context in the form of the main building of the National Museum and neighboring buildings. The implementation of the competition concept with a significant impact on the functioning and interpenetration of the city park and the activation of the museum space, which used to be the back-up area, required a thorough understanding of the context of the place.

An important issue was to define the relationship of new buildings with the form of an existing building, creating strong and clear functional and compositional-aesthetic relationships, bearing in mind that the solutions are to be feasible in the future, assuming the option of staging, economic efficiency at the implementation stage and low operating costs in during the use of the building. We adopted the relationship with the main building and the surrounding greenery, functionality and creating space for social integration as an element guiding the design process. 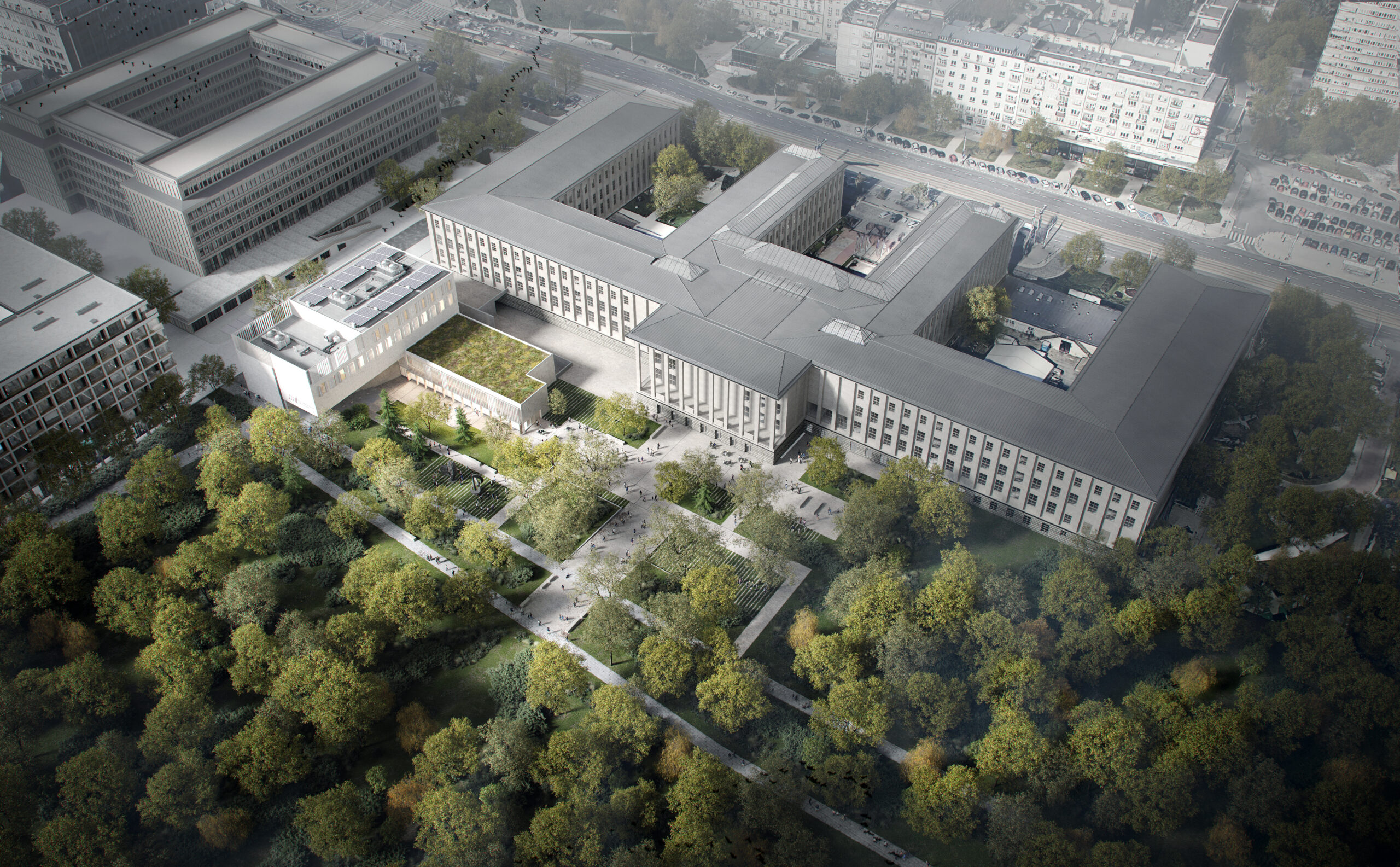 In order to consciously shape the space around the building, we analyzed the factors influencing the thermal comfort for the Warsaw region.

The most important factor influencing comfort is the wind, especially in winter. The use of wind and sun protection increases the number of comfortable hours by 25%

We placed the building in such a way that it would protect the public space next to the building from western winds. Such a solution, together with the remaining tree stand that gives shade in the summer season, should significantly affect the attractiveness of the space surrounding the building. 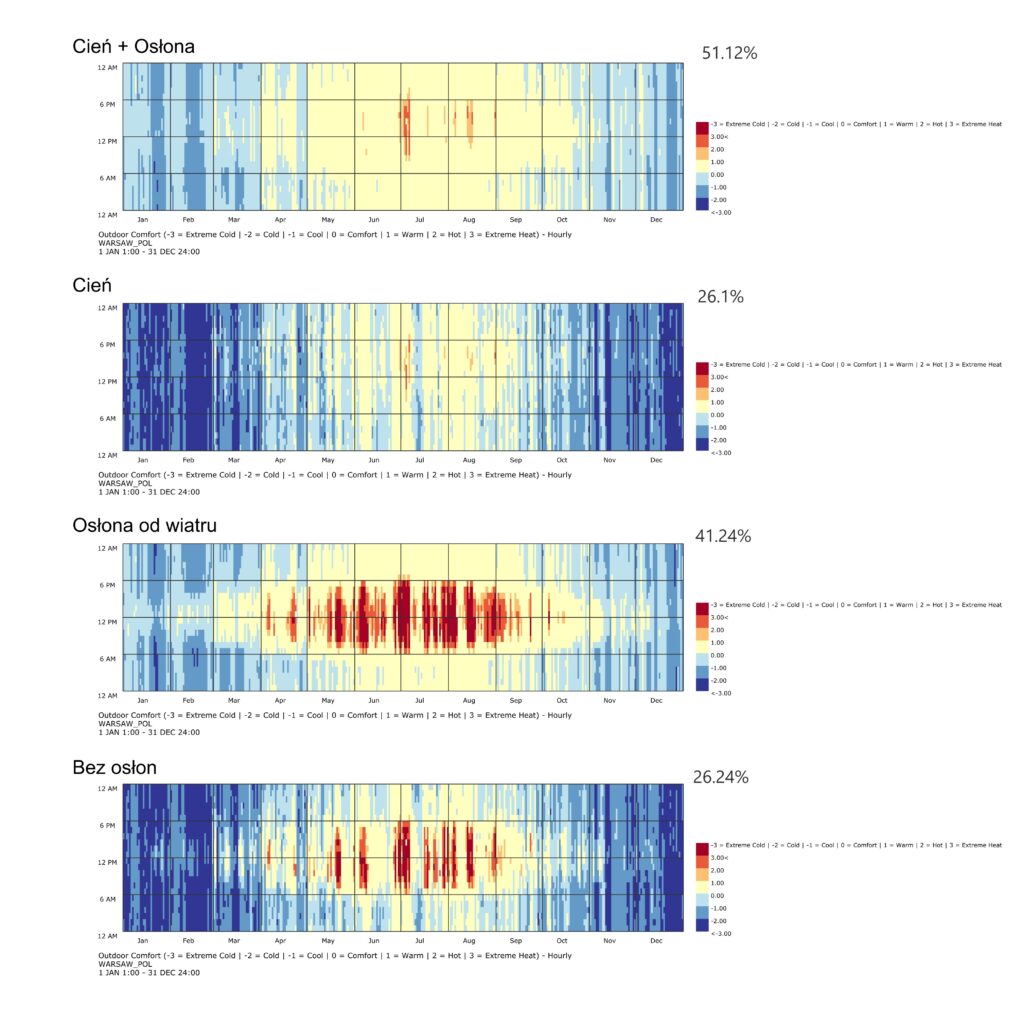 To reduce possible overheating of the building, the following assumptions were made:

- no glazing on the southern facade not shaded by trees

- the use of movable blinds in the office part

- overhang of the entrance part

The facade of the painting studio

The facade provides natural lighting for the painting studio. In order to reduce the risk of overheating the room, we used vertical blinds which obscure the glazing.

In order to select the appropriate setting of individual blinds, a series of analyzes of the insolation of the room was carried out with a different configuration of the slats. About 1000 possible configurations were analyzed. The applied solution allows the ASE ratio from 65% to 7% (the level awarded in the LEED certification), significantly reducing the possibility of overheating and too high intensity of light in the room. 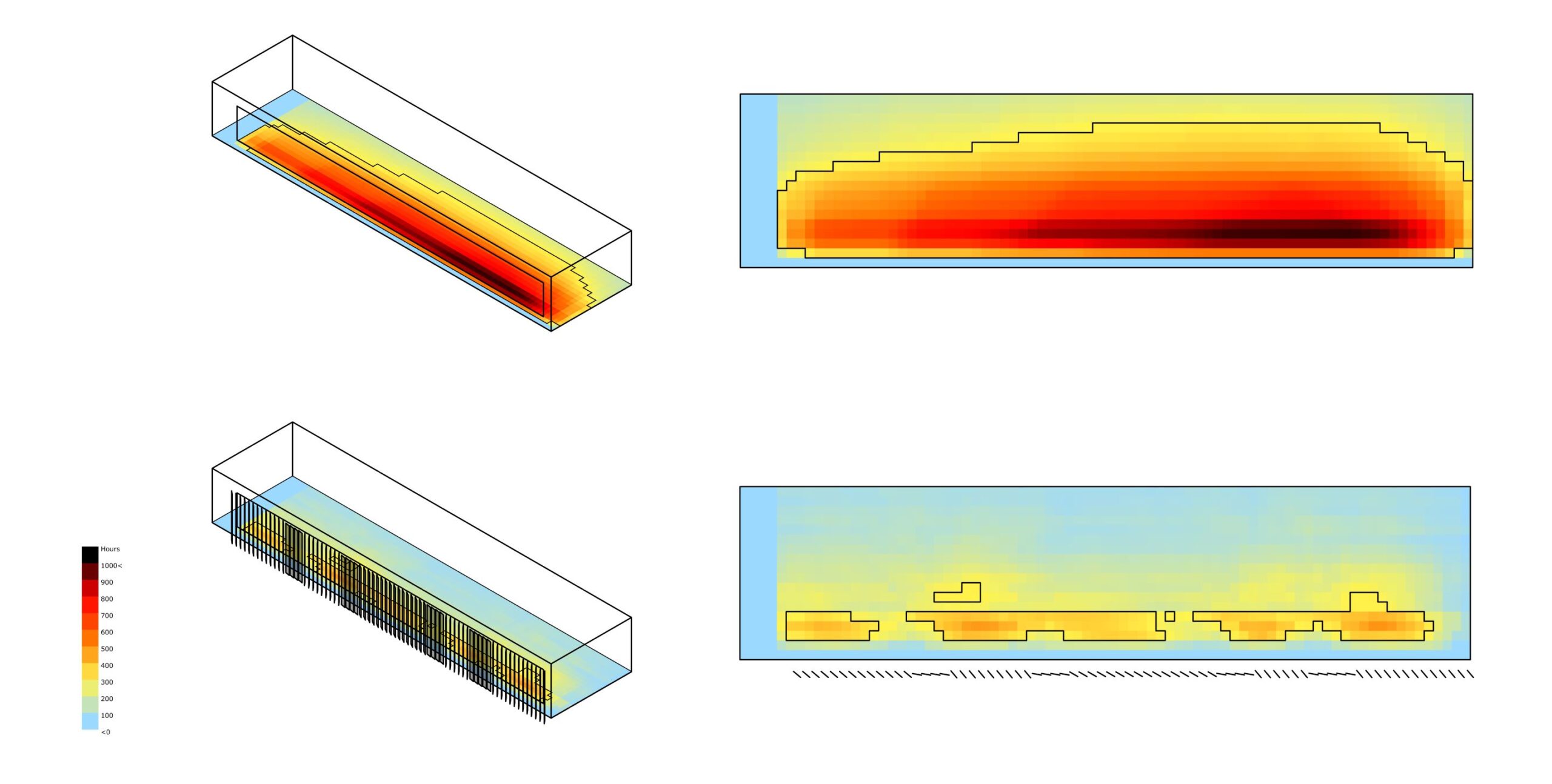 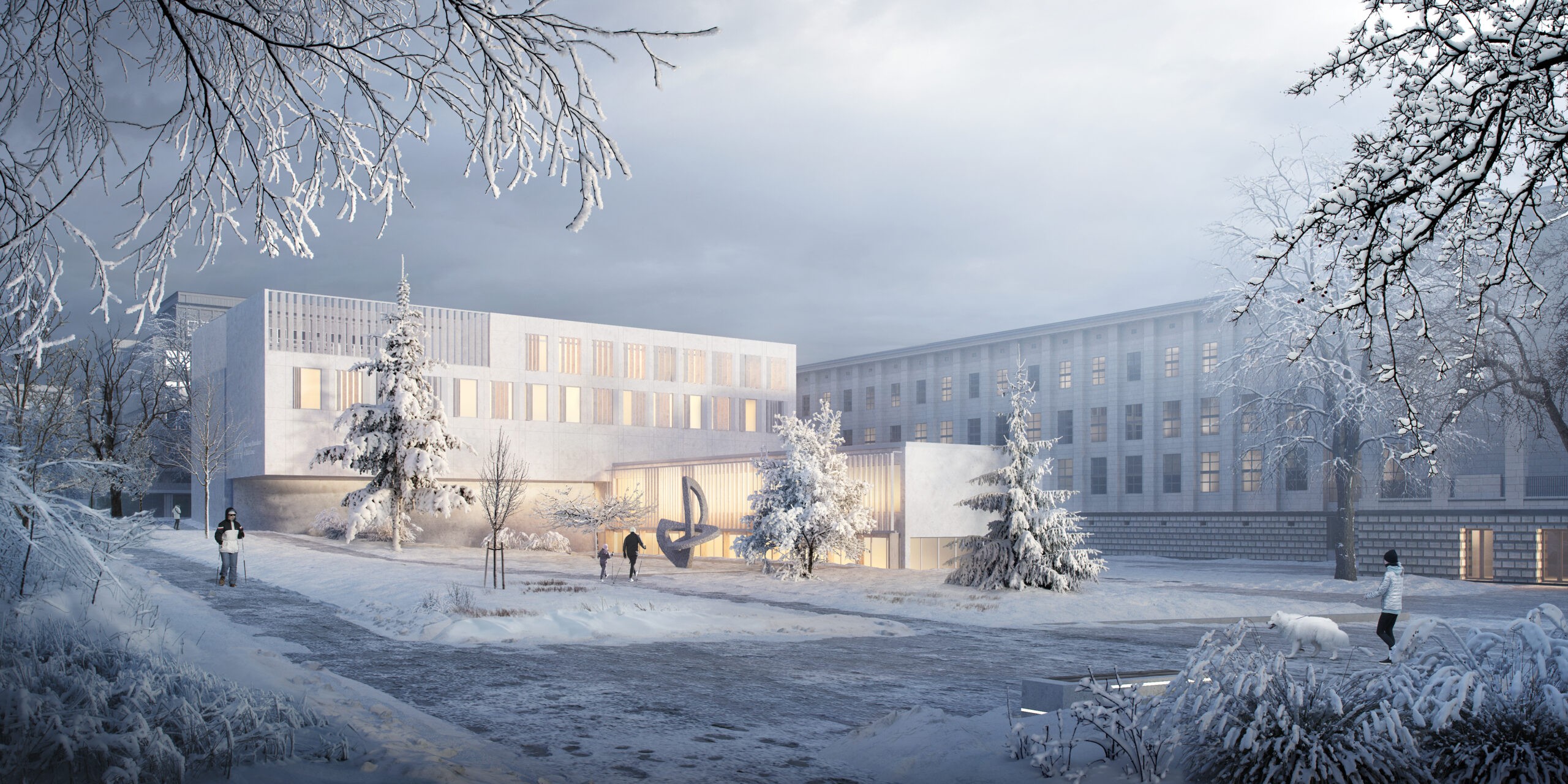 Based on the energy model, we have derived the following energy strategies for the facility:

- increasing the insulation of external partitions

- insulation of cold stores from other rooms

- the use of movable blinds on the facade of the office part.

Increasing the insulation of the partitions reduces the need for heating 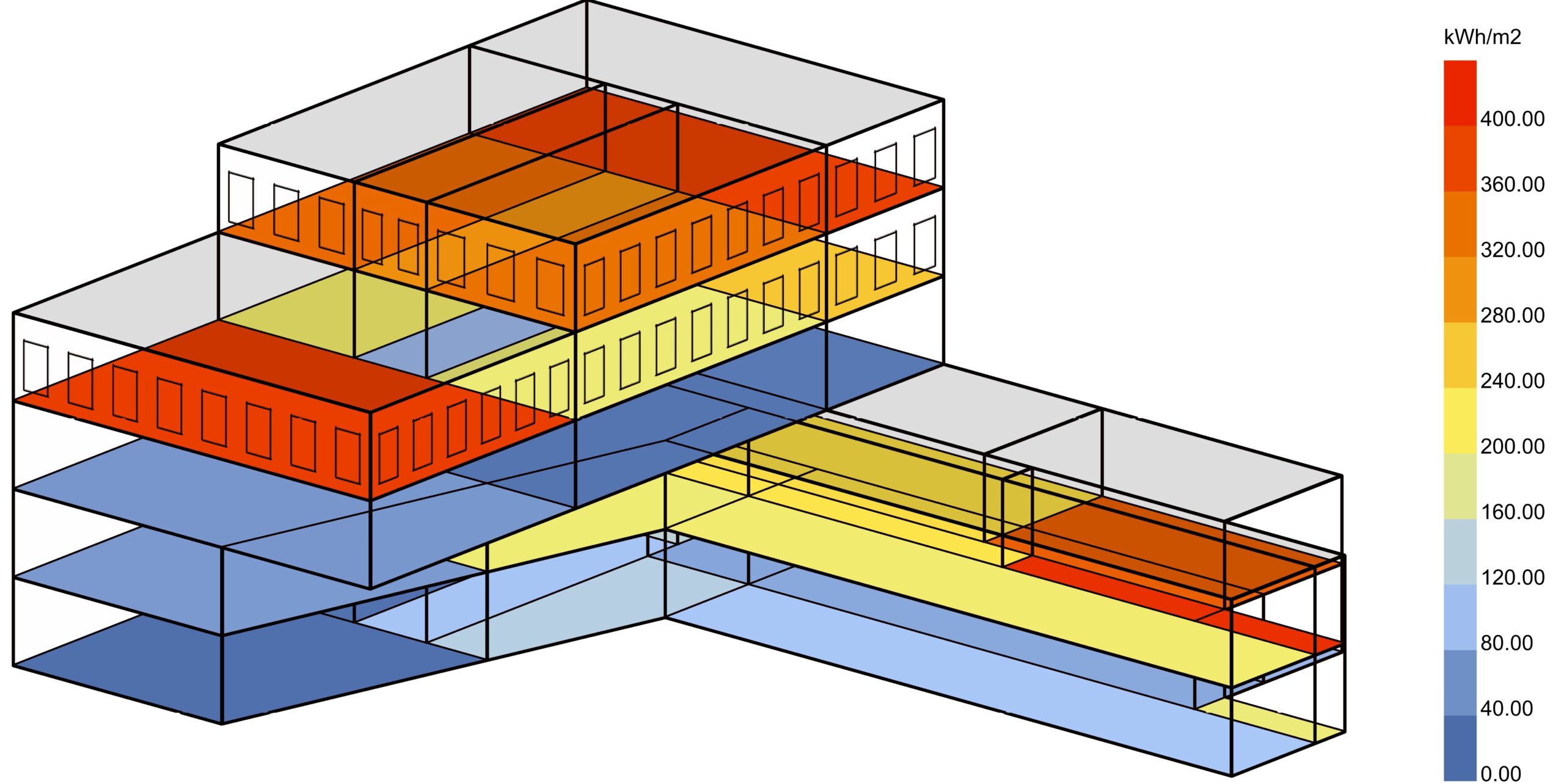 The use of a shutter system reduces solar gains in the rooms, reducing the risk of overheating. 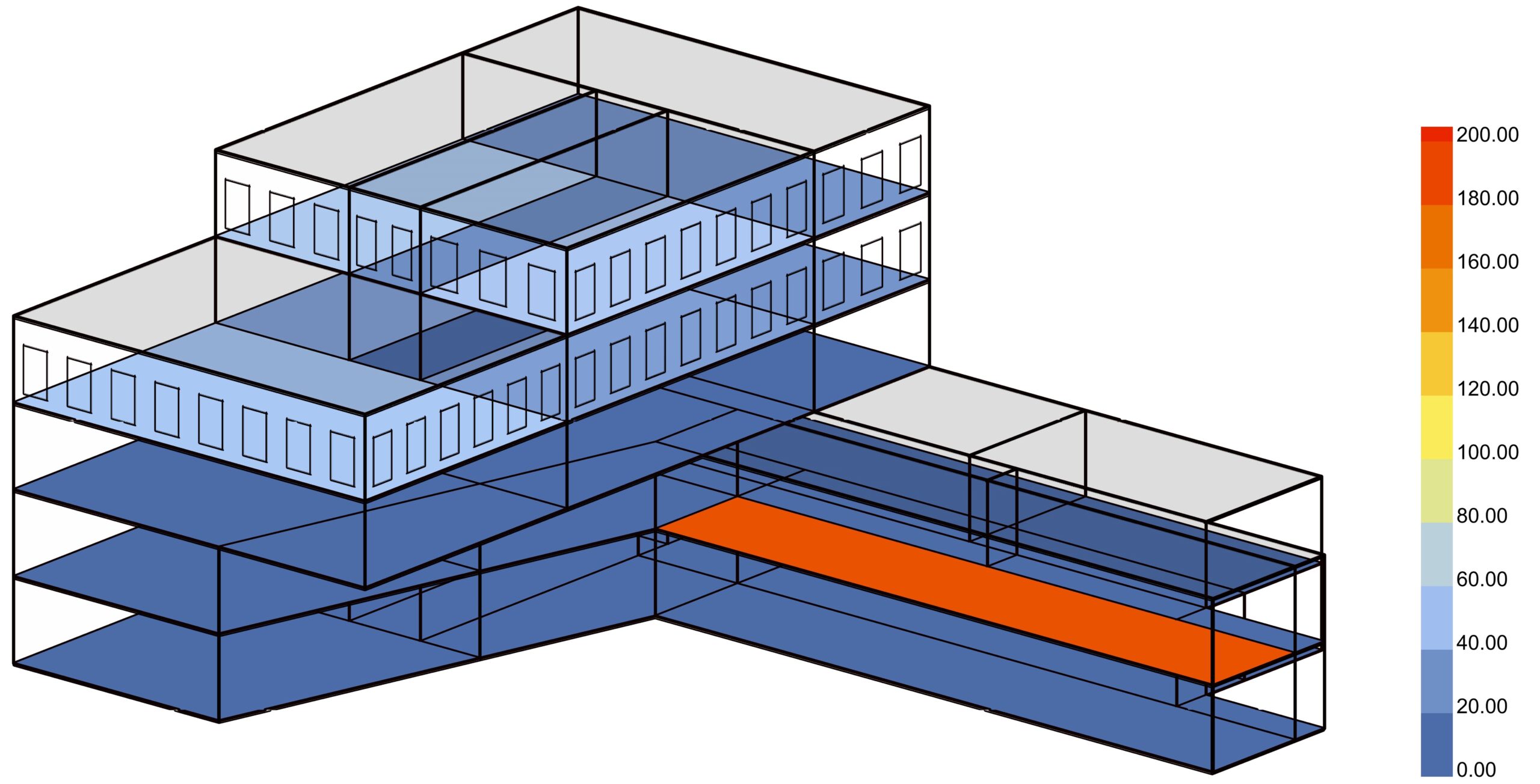 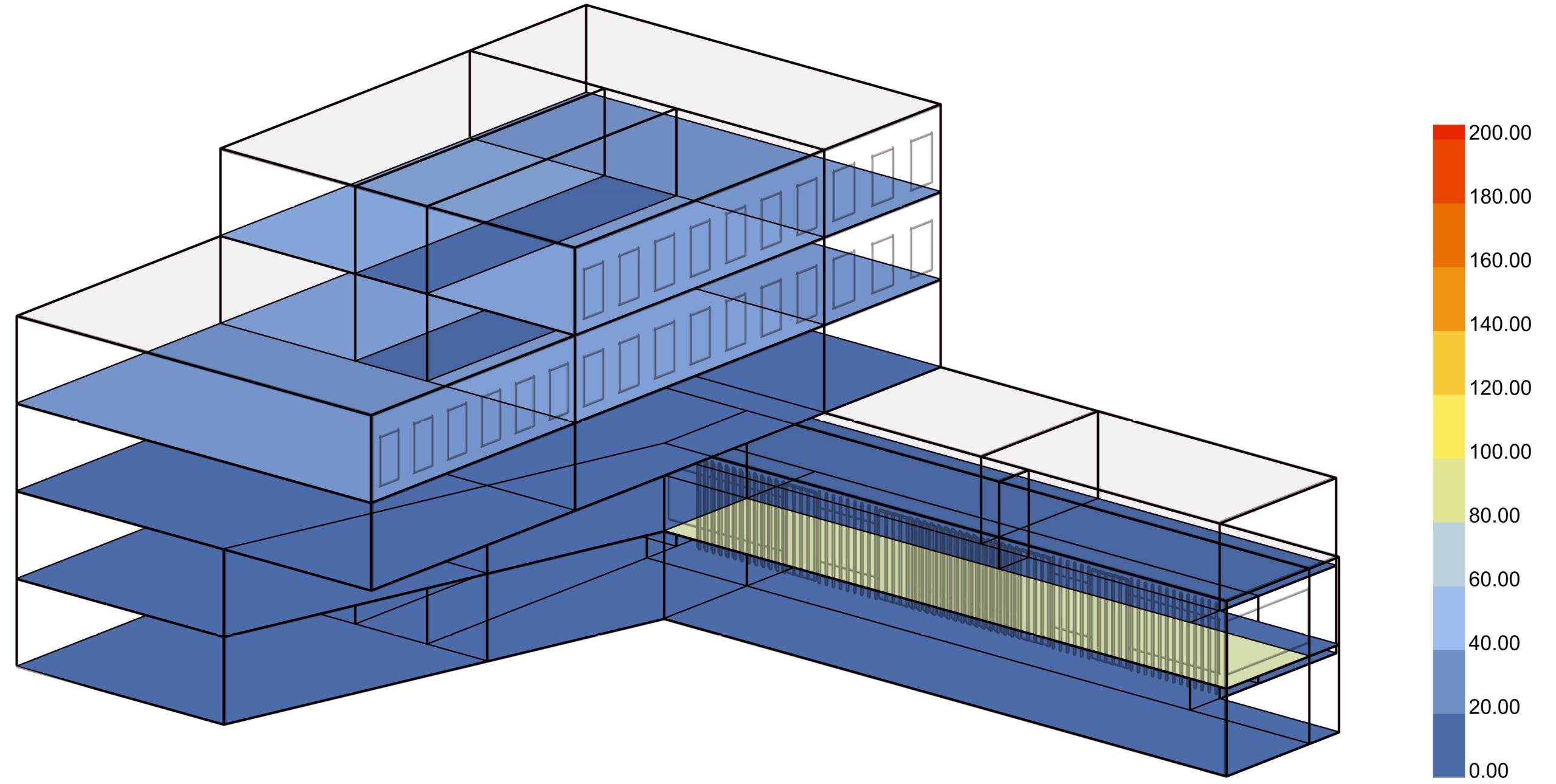 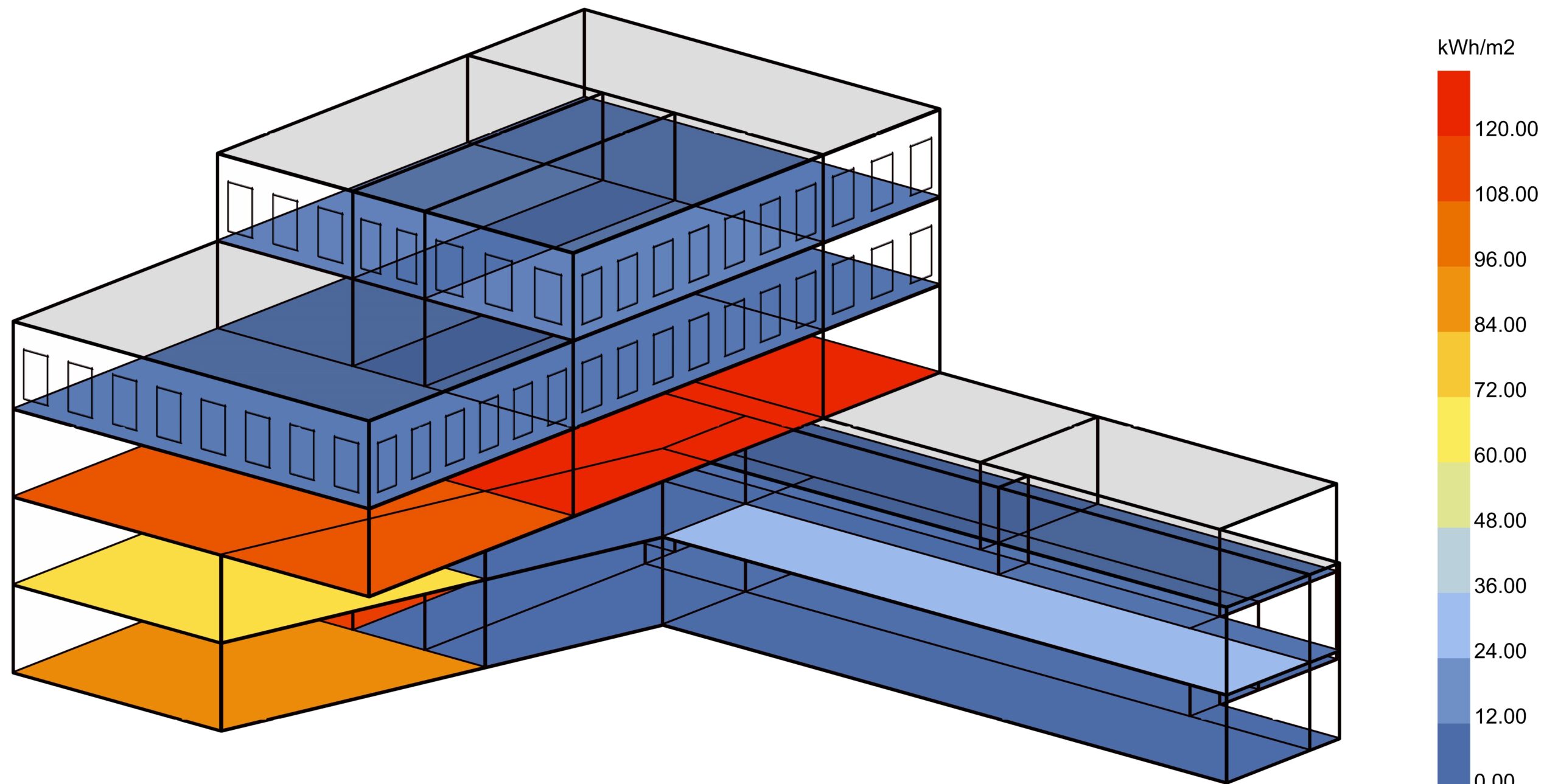 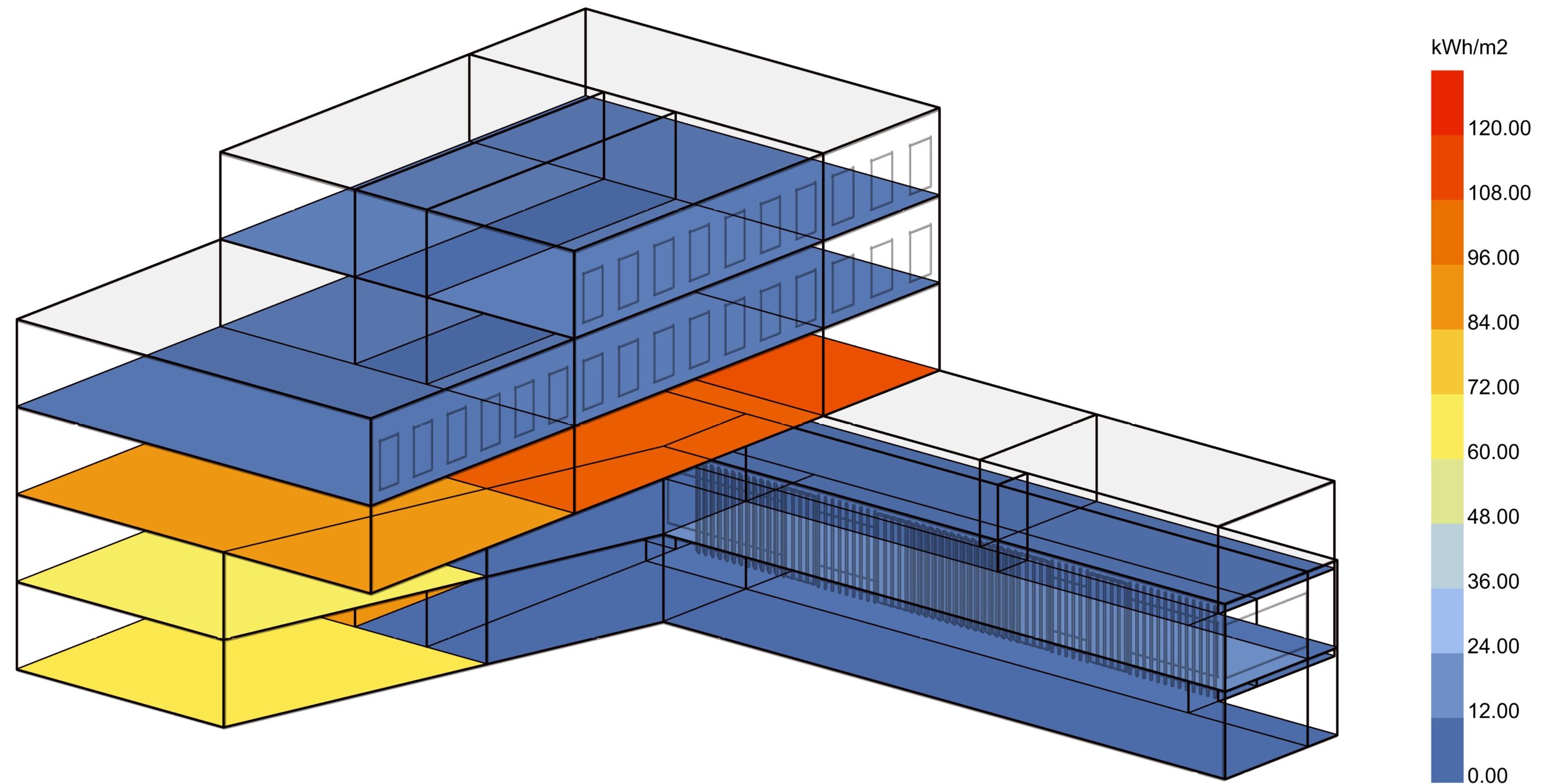 OBC Star programming and design of a facade light system

The task of our company was to prepare software to control the lighting of the façade of the tallest skyscraper in northern Poland, Olvia Star, the Olivia Business Center complex.

We regularly implement new static and dynamic scenarios of 156 m of the skyscraper. 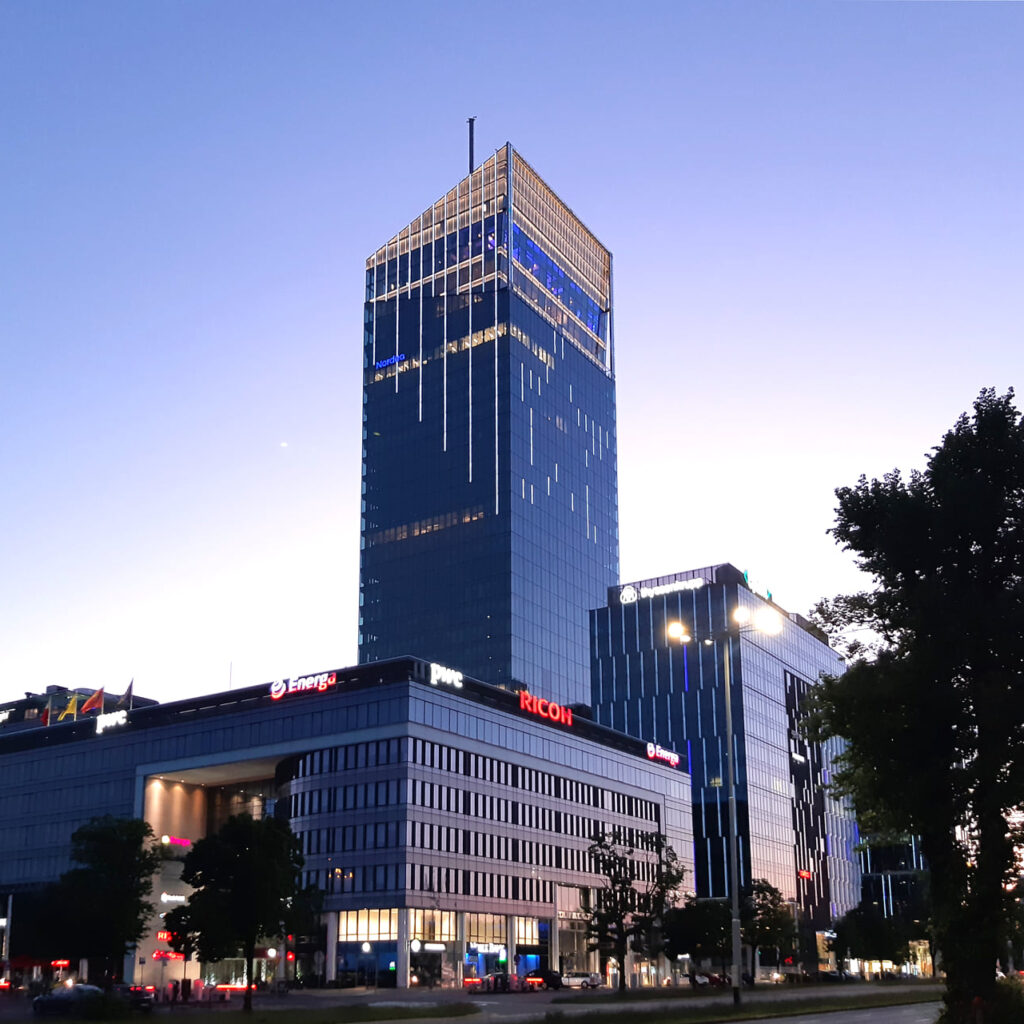 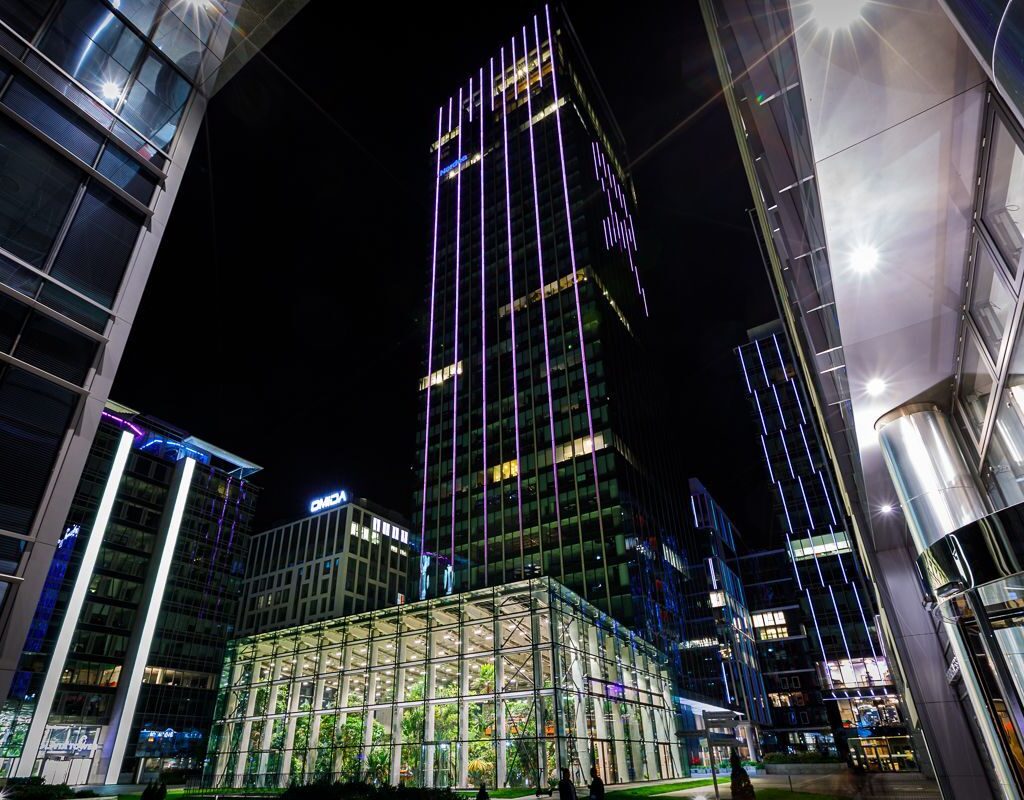 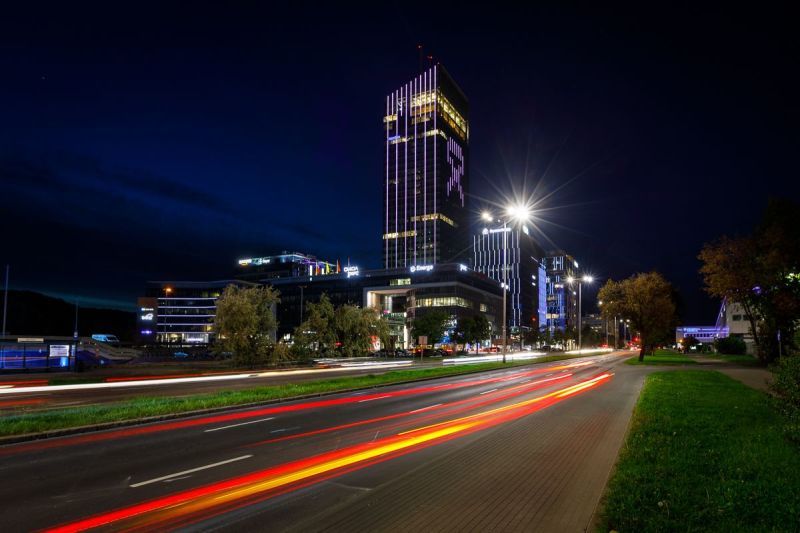 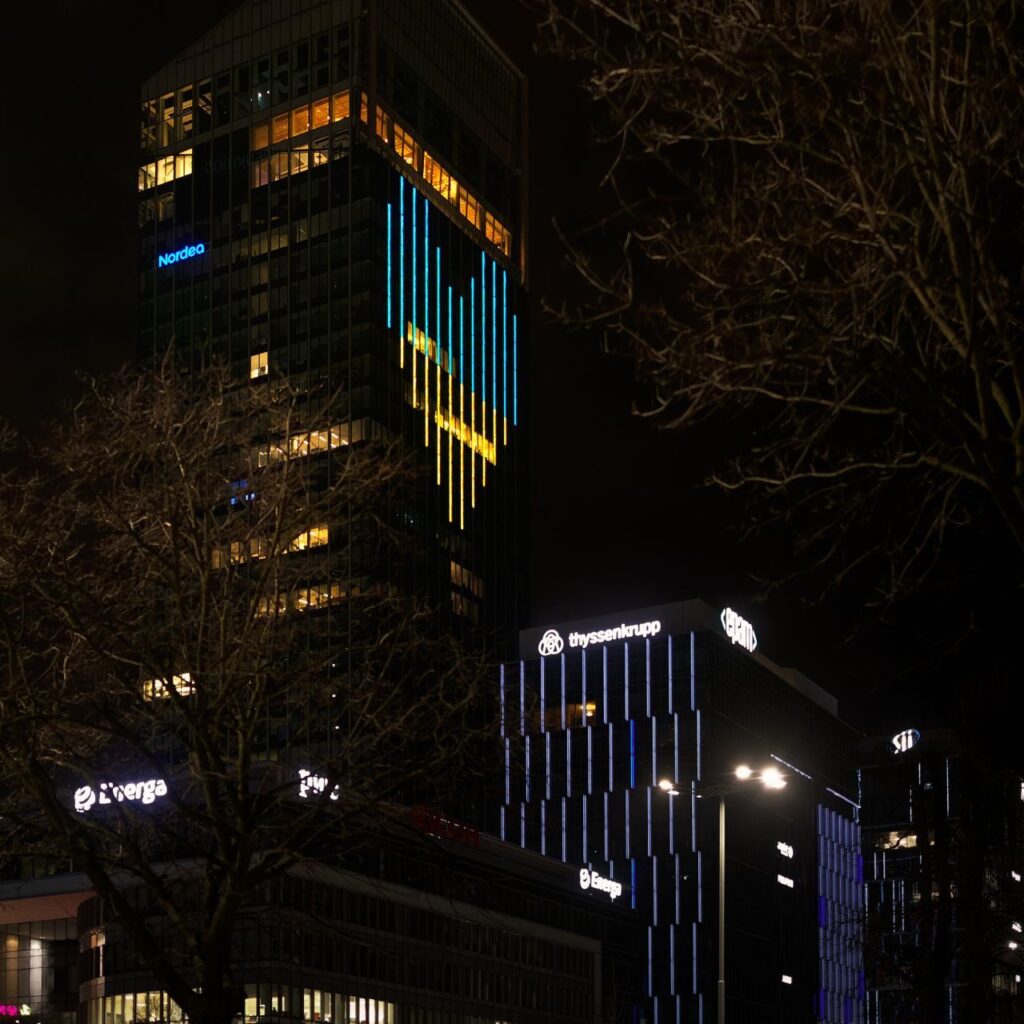 As part of the Antropocene at Zodiak Warsaw Pavilion of Architecture exhibition, curated by Kacper Kępiński and Adrian Krężlik, we had the opportunity to collaborate on the project - installation the Water by Miastopracownia.

The project involves changing the geometry of the terrain of Krakowskie Błonia and the Rudawa River, in a way that allows the creation of a floodplain in order to restore the biodiversity of the area and return it to nature.

Our task was to prepare a digital model in a way that ensures the proper course of water during flooding and to perform a large-scale fluid simulation. The final simulation consisted of up to 210,000 particles, with calculations taking 16 hours.

Unsealing the embankments of the Rudawa river and releasing water from this tributary of Vistula towards Kraków’s Błonia meadow might deprive the human inhabitants of the city from the green common – but perhaps might also restore it: to wild geese, swans, weatherfish, moderlieschen, common bleak, and creek minnows.

Poland’s rivers that had been reduced to the role of sewage canals, regulated and deprived of life, cannot be patched up and healed pointwise. We need coordinated measures along the entire length of the watercourse, with deep restoration, removal of barrages, and crushing of concrete.

The section of the riverbed here presented is therefore only a small part of the proposed activities. The whole unfulfilled dream of inland navigation and the waterway of the upper Vistula should be done away with. And it should be replaced: with mallard ducks, gulls, black storks, and herons. And with the little freshwater jellyfish of Craspedacusta sowerbii species.

Water milfoil, pondweed, coontails, nuphars and water lilies form excellent breeding grounds for pike, bream, roach, and rudd. So let us give up the meadow and allow them to spawn!

The pier of the future, Gdynia

Collaboration on the project and a set of simulations for the Pier of the Future in Gdynia.

Preparation of the tool and simulation of surface water runoff for the designed buildings.

Analysis and design of the facade for office space in Zaczerń

Development of an algorithm for the design and fabrication of a facade.

Simulations and analyses in architectural design 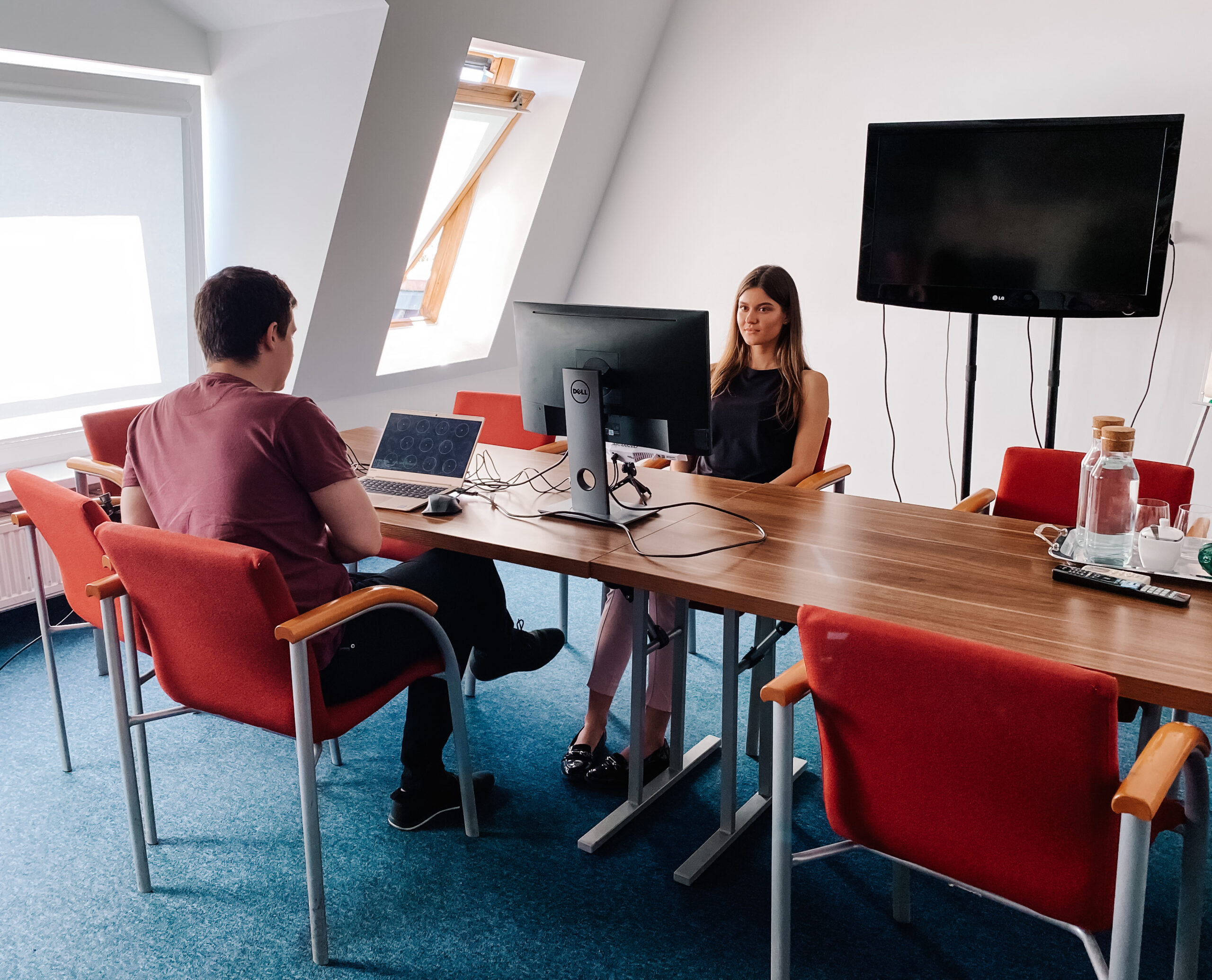 Research conducted in 2015 by scientists from the Max Planck Institute for Psycholinguistics in Nijmegen (the Netherlands) confirmed those earlier assumptions. The study was conducted on a group of 7,500 people from 13 countries in Asia, America, Europe and Africa, who were tasked with reporting on their everyday lives

In this case, too, scientists confirmed that sight is the dominant sense, and it is the record of visual stimuli in our memory that is the strongest. Interestingly, it turned out impossible to establish a hierarchy of the remaining senses, which they found to depend on the place of origin of the research participants, resulting in a theory that the hierarchy of senses is a function of biological and cultural conditions alike.

Creating a concept of a healthy and ecological facility.